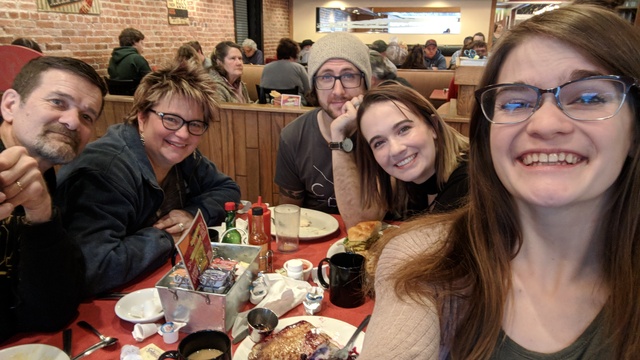 *Paul and I were on the road by about 8:45 a.m.  We were driving to Moscow to have brunch at The Breakfast Club with Molly, Travis and Cosette as part of the gift Bill and Debbie gave us for Christmas.  The gift was a meal and a movie.  Our meal at The Breakfast Club was delicious for all of us.  After we ate, Travis headed home, because he had to work this afternoon and was unable to join us for the movie.
*We had a little time to kill, so Molly, Cosette, Paul and I drove down to one of the local thrift stores to look around.  The we drove out to the movie theater to see Spiderman: Into the Spider-Verse. This was a computer generated animation that was very entertaining.  I am not going to say much about the story, because I kind of enjoyed seeing it not knowing much.  But I will say I was awed by the animation and the say the story was told.  It was very entertaining, and CG animation just keeps getting better and better.
*After the movie it was time to say goodbye to the girls.  We dropped Molly off at her apartment and took Coco back to her car, and said goodbye.
*Last spring Molly had found an “Idaho Trivia” game that was created back in the 1980’s, and gave it to me for Mother’s Day.  We took the stack of cards in the car, and I read Paul questions for most of our drive down to Moscow, and for as long as I had light driving back to Kellogg.  The game has a mixture of interesting questions, odd questions and obscure little facts about this great state we live in.  But after reading through multiple cards, we started connecting some of the information, and learning some Idaho trivia facts we didn’t know.  (For example, did you know Latah County, where Moscow is located, was named after Latah Creek?  At at one time there were more Chinese located in Idaho than in any other place in the west outside of San Fransisco.)
*Once I got ready for my classes the next day, and had a nice talk with my friend April on the phone, I felt like watching a movie.  I discovered the original Lethal Weapon movie was on Hulu, so Paul and I watched the first part of this movie.  We will finish the rest tomorrow.

Created by Carol Woolum Roberts at 11:30 AM