This assignment is in three parts. First, choose a poem that you feel best exemplifies snow and post it. Second, explain why you chose that particular poem.  ( Questions you could consider: What drew you to that particular poem? Was it  a new poem or one you were familiar with? ) Third, find photos you have taken that connect in some way with the poem and your own writing about the poem.

While directing and having the lead role in a play, I didn't have the energy to write many sibling assignments.  I am going to try and tackle some and get caught up.

I had taken notes on this particular assignment, so I am going to see if I can remember what I was going to write about.

The poem I chose was one Robert Frost wrote, titled:


Stopping By Woods on a Snowy Evening
Whose woods these are I think I know.
His house is in the village though;
He will not see me stopping here
To watch his woods fill up with snow.

My little horse must think it queer
To stop without a farmhouse near
Between the woods and frozen lake
The darkest evening of the year.

He gives his harness bells a shake
To ask if there is some mistake.
The only other sound’s the sweep
Of easy wind and downy flake.

The woods are lovely, dark and deep,
But I have promises to keep,
And miles to go before I sleep,
And miles to go before I sleep.
There were a few reasons I chose this particular play.  As I was directing and rehearsing the play, as well as working at a full-time job, it was a bit exhausting at times.  The last stanza especially hit me, when talking about promises to keep, and miles to go before I sleep.  While working on a play, you have commitments to take care of that need your attention.  When working full-time, you have promises to keep, or commitments that need your attention.  And sometime having the energy to get it all done is hard,
Another reason I chose a Robert Frost poem, is the character I played in the play, Joy Davidman, was also a poet, and she shared a poetry award with Robert Frost, so he had been on my mind.
The poem also refers to the darkest evening of the year.  While working on this play, there were some dark days, especially in dealing with death.  The character I portrayed, Joy Davidman, dies on stage each evening.  While rehearsing for this play, there were several deaths that hit me pretty hard.
First our sweet dog Juliet died in January.  She just fell asleep one night and didn't wake up.  She was our daughter Zoe's dog, and it was so hard to tell Zoe her sweet little companion had died.
Then Paul's Uncle Ted died.  Ted was a friend of my dad, and it made me think a lot of Dad, and him passing away at such a young age, and how I miss him, and wish he could still be living in Kellogg.
These are some photos I took last winter in Post Falls near the dam.  These photos remind me of a place, as the poem says, "between the woods and frozen lake". 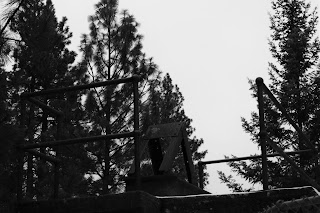 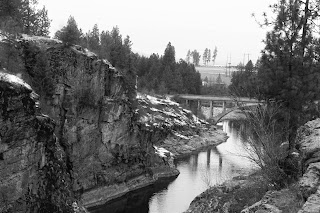 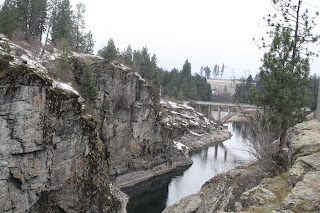 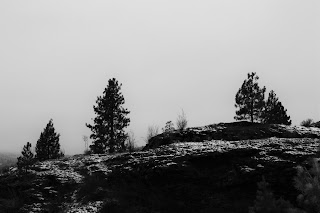 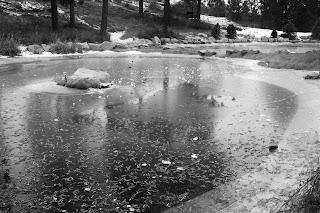 Created by Carol Woolum Roberts at 5:27 PM No comments: