Bless Be The Ties That Bind...Our Hearts in Christian Love 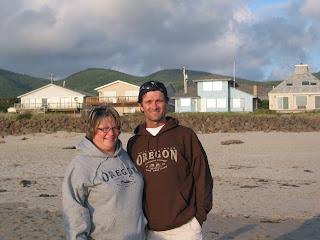 After meeting 27 years ago, we grow more and more in love every day.

Well, I'm a little behind on my sibling assignments, so I hope to get caught up during this week of spring break.

Let us hearken back to February 14, Valentine's Day, when this assignment was due.

The assignment, which I assigned throughout the month of February, with the theme "Ties", is as follows:

"Write about the ties that bind you to your husband or wife."

PKR and I joke about the first two times we met. I didn't make much of an impression on him, because he didn't remember me until we met the third time...I guess third times a charm.

The one he remembers is me coming over to his parent's house to deliver his sister's high school graduation present. I had just finished my first year at the University of Idaho, and he was home from Western Montana College. His sister and I were friends.

It was first the ties of Christian love that brought us together. There was a group of young people that summer that hung out together, and did different activities all summer. Yes, I thought PKR was very attractive, but I thought he was way out of my league. After all, I remember him from being a freshman at Kellogg Junior High School as the senior who was the quarterback on the football team, one of the start basketball players, and a state track champion. Those kind of guys weren't interested in girls like me.

Summer culminated with a trip to Church Camp during the first week, of August. PKR was attending, as was most of the kids who we hung out with that summer. We arrived at camp, and one of the girls from Kellogg made a comment about PKR and I making a "good couple". I was genuinely surprised by this comment...again, he was way out of my league.

But I guess PKR had other plans. When I went to church camp, it was popular for the boys to ask the girls to the Thursday night Bonfire. Well, by Wednesday night, PKR asked me to go to the bonfire. I was quite pleased, and I guess that was our first date.

While at camp, our hearts were tied, first with Christian love, and then that focus also started changing beyond being "a brother and sister in Christ", so something a bit more romantic. When we returned to Kellogg after camp, we spent the night before I left for college walking around town, and talking alot. Then I returned to Moscow, and, later, he returned to Dillon.

We started dating in August of 1982. Between that time, and July 1986, when we got married, we were only in the same town about 18 months of those four years...so it was letter writing that tied us together at that point. And I think it helped us get to know one another on a different level...especially because we both like to write.

Marriage wasn't something I took lightly at all. I wanted to make sure that PKR was the man I was suppose to marry, and that I had not doubt whatsoever he was the man for me. During the summer of 1984 I moved to San Bernardino, California and worked at the International Headquarters for Campus Crusade for Christ. The question I wanted answered that summer was this..."Is PKR the man I am suppose to marry?"

By the end of the summer, after much prayer, the answer was yes. If PKR asked me to marry him, I knew without any reservations, that he was the man I wanted to spend the rest of my life.

During the spring of 1984, PKR told my best friend CE that he was going to ask me to marry him, and that he wanted her help. But God knew I needed some time over the summer to have peace about the decision.

On December 10, 1984, PKR asked me to marry him in front of a room full of sorority sisters at the TriDelt house at U of I. By then, I could with confidence say, "Of Course!!"

Once that decision was made, and I committed myself to PKR, and he to me, that is what has kept us tied together. Because we knew if was right, because we are committed (as he puts it, divorce is not a word we use), we are forever tied to one another, through the good times and the bad. And, for us, it was that time of deliberate seeking after God to give us the answer and patiently waiting for Him to say, "Yes", this is the one for you.

And since that time, I have never regretted my decision.
Created by Carol Woolum Roberts at 11:53 AM 2 comments:

Life Continues, Despite the Drought

Despite the drought in my blog writing, life continues.

March has brought with it many pleasant surprises, much spiritual growth, and beautiful spring weather.

I survived my big project at work, Career Day last week.  I believe it went really well, and it was nice to read the comment of one of the students who said listening to one of the speakers made her really think about going to college.  To me, that is what Career Day is all about.

We have started a home group at our house on Sunday evenings through our church, Mountain Valley Congregation Church, and it has been such a blessing.  We are doing Rick Warren's "Forty Days of Community" which challenges us to share and pray with one another, encourage and serve one another at church, and do a project in the community.  We have the wonderful opportunity to help a woman who runs a local daycare fix up her yard, a task she is unable to do.  We are also going to relieve the workers at another church in the valley who do a soup kitchen once a week.

I have found I have needed this group to help me focus on the needs of others.  I tend to isolate myself, and focus on my own needs so much, that I don't look at the world around me and what God wants me to do for others in my community.  This group is helping me do that, and I am so thankful that my focus is changing.

I had a wonderful weekend.  Friday night Paul and I entertained at a dinner at the Shoshone Golf Course, and had a wonderful time.  Then I got up early Saturday morning, picked up my mom and drove to Lewiston for Kiki Aru's basketball tournament.  My cousin LM picked Mom up in Lewiston and drove her to Orofino to spend the night with her sister.

On Sunday, Kiki Aru and I drove to Orofino and had a wonderful lunch at my cousin's house, and then headed back to Kellogg.  After a little detour that wasn't planned, we made it home.  I think the detour was planned by my Grandma West (who has been deceased almost 20 years), because the road we traveled on took us to the place where she was born.  We traveled along Cedar Creek Ridge Road, and ended up at Gold Hill.  Very interesting, because we had just been talking about this area at lunch with my cousin.

This summer all the Orofino family is planning a reunion, and hopefully we will take a road trip to Grandma's birthplace, as well as "The Ranch" where Mom lived until she moved into Orofino.

Z2 went to the District Speech Competition this weekend, participating in Duo Interpretation.  Her and her friend RC got third place, and will be going to State Competition in Pocatello next month.  I am so proud of her!!  PKR had six of his students qualify for state, which he is very excited about.

I hope to use spring break to get caught up on my sibling assignments.  I think I am behind by about a month and a half.

Hope to write again sooner, rather than later.
Created by Carol Woolum Roberts at 9:41 AM 4 comments:

Here, There and Everywhere

That is what I have felt lately.  I've been here, there and everywhere.

Except writing on my blog.

Except reading others blogs.

But, since the first of the year, I have been to Post Falls, Coeur d'Alene, Wallace, Mullan, Houston, Las Vegas, Denver, Salt Lake City, Spokane, Moscow, St. Maries, and Bonners Ferry.

I feel like I could write my own version of the song "I've Been Everywhere, Man".

Now that I have settled back home for a while, I hope to share some stories soon.
Created by Carol Woolum Roberts at 10:06 PM 2 comments: