Since our sister Christy will be moving back to the old neighborhood soon here is the assignment:


"Share a memory of  hanging out with people from the 'hood during childhood .

Christy's story is here, and Bill's will soon be here.

My memory involves a certain summer I was in grade school.  It was upper grade school, but I can't remember what summer it was exactly, but if I was to venture a guess, it was 1974 or 1975.

Our "hood" encompassed a rather large area called "Sunnyside".  Our grade school was called Sunnyside and was on the east edge of our neighborhood.

One summer, my friend Kellee Crall and I decided to "hang out" with the Sunnyside Bike Gang.  This was a group of boys in close proximity to our age that would ride their bikes (I am talking Sting Rays, not motorcycles.)  Their hangout was the Mormon Church parking lot on Mission Avenue.

One of the endeavors this "gang" took on that summer was creating "rubber band guns" and
shooting one another with the rubber bands. 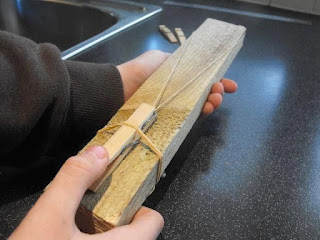 This  photo shows a gun similar to the rubber band guns that were used.  They were rather low tech.  A board, a clothes pin, and some rubber bands.  You loaded the rubber band into the clothes pin, pressed the clothes pin trigger, and off sailed the rubber band to the intended target.
I remember Kellee and I going and constructing our own rubber band guns.
I'm not sure we ever really were involved in an official rubber band gun war, but we had our weapon just in case.
If I remember correctly, some of the members of the bike gang included Richie Poulson, Mike Margason, Joe Margason, Larry Covey and Mouse Covey.  I think the Covey's were living there by this time.  There may have been others, but these are the ones I remember.
The bike gang would congregate in the church parking lot after dinner.  During the afternoon, we were all at the Kellogg City Pool spending time swimming.
Sounds like a pretty good summer to me.  Days spent swimming at the pool, stopping off at Wee Willie's store for some candy on the way home, or maybe Swansons Grocer, and then, after dinner, jumping on the bike and heading to the church parking lot for some rubber band gun action.
That is one of my fond memories of my time in the Sunnyside 'hood.
Created by Carol Woolum Roberts at 9:26 PM No comments:

Brother Bill gave us this week's sibling assignment:
Since Carol is taking an online photography class, let's do an exercise together.

2.  Make yourself pause, look, and see and create a well-composed picture following the instruction of Bobby Baker.  In other words, keep the picture simple.
3.  Write a paragraph about your experience doing this.
You can see Christy's blog post here, and Bill's is here.
I decided to combine two assignments into one, and not only tried to take a simple picture as described in the article, but I also tried to do the following:
In the spirit of elevating the ordinary, today's challenge is to find beauty in an unlikely place. Find the messy, the dirty, the discarded, the forgotten, and transform it with your lens. See it into beauty.
I enjoyed walking around my yard looking to capture "ugly-beautiful", while also making it simple by getting the things that may distract from the composition out of the frame.
Here is the photo I chose from the more than 160 photos I shot around my yard. 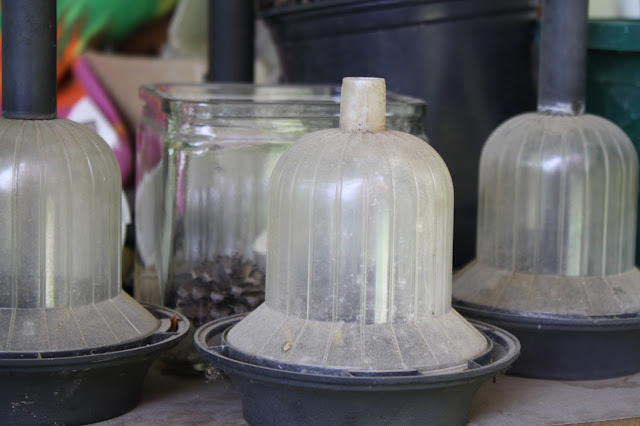 I took four photographs of these items, but the reason I chose this one is because I liked that the
focus was on the three upside down solar lights, and peeking from behind is the square vase with a pinecone peaking through.  There is a little bit in the background, but to me, the main focus of this photo are the three solar lights and the vase. 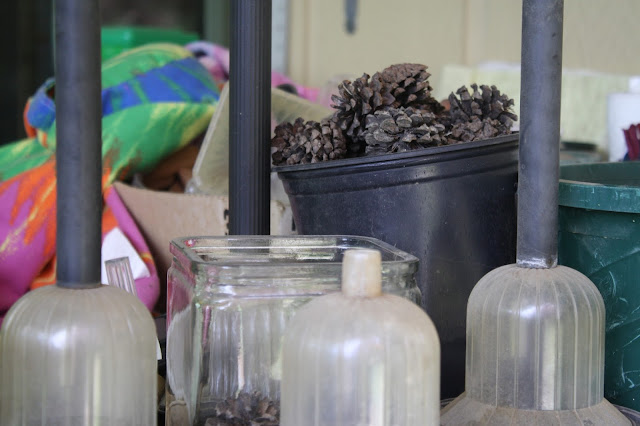 This photo captured the black pot with pinecones in it, and I believe this object became more if the focus.  And the object toward the back became too distracting. 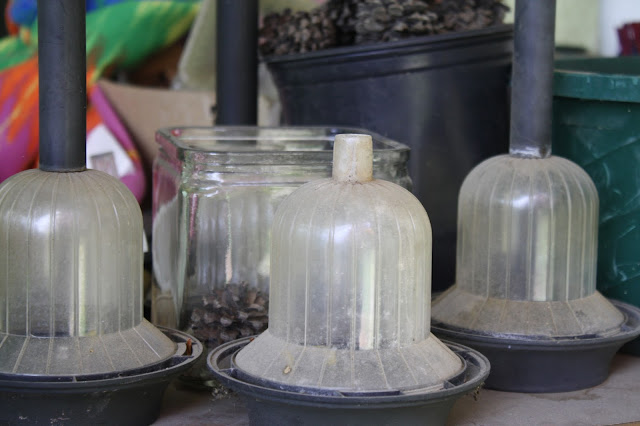 Even with just a little bit of the pinecones showing in the black pot in this shot, it was too distracting. 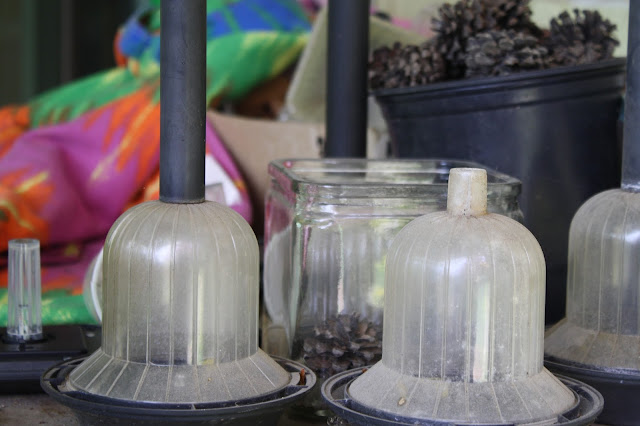 This shot showed a bit more of what was on the table to the left, plus the top pinecones, and it made the image too busy.
Here are more shots I took around my house to capture "ugly-beautiful".
You can find them here in my Flickr album.
Created by Carol Woolum Roberts at 7:49 PM No comments:

This week I gave the following assignment:

Think back to something that happened when you were a student at Sunnyside Elementary, and why you think that incident has stuck in your memory after all of these years.

Christy's will be here when she posts her assignment, and Bill will have his posted here.

All three of us attended Sunnyside Elementary for grade school.  I attended first through sixth grade there.

I was actually talking about this particular memory with some friends a couple of weeks ago, and what an impact it made on, not only me, but our whole class at the time.

Here is a photograph from when it was my grade school.

The incident I remember begins in fifth grade.  Toward the end of the fifth grade year, some fifth and sixth And grade students started going to the back of the playground, by the baseball backstop, and smoking cigarettes during recess.

Someone told on them, and it was rumored that it was my group of friends.

The accusers stuck up for the kids smoking, and my group of friends denied telling.  (To this day, we maintain our innocence in telling.  I'm not sure how the principal found out.  Maybe one day he looked across the playground and saw smoke billowing out of the group of students standing in a group by the baseball backstop.  I don't know!)

So a divide was made.  I remember a girl from my group of friends got in a fist fight with a girl from the "other" group.  Tensions were high, as least that is the way it seemed to my fifth grade memory.

When we returned to school the following fall, in sixth grade, more students joined us from Elk Creek School, but the lines between the two group remained the same.  We got a long better in sixth grade, but it was interesting how, as we grew older, the two groups remained separate, even on through junior high and high school.

I am not sure if the cigarette smoking had anything to do with it.  These lines may have been drawn anyway.  But I often look back at that time, and that incident, and thought it was interesting how that effected our friendships from that point on into junior high, high school, and beyond.

I think I remember this, because it created such a dynamic in our class at the time.  I think even the class above us was affected as well.

If any of you reading this were in school with me at Sunnyside during fifth or sixth grade, and remember this any differently let me know.  I would be curious to know how others looked at this incident.  One friend of mine remembers it the same way I did.  Another friend has no memory of it whatsoever.  So leave me a comment if you remember anything.
Created by Carol Woolum Roberts at 8:01 PM No comments: