Sibling Assignment 2015.18: In Step With My Obsession #3Siblings

While in Moscow about a week ago, Christy asked me if I saw the email from our brother Bill giving us our next sibling assignment.  I hadn't, so she shared with me the next assignment:

"We all have our little obsessions.  What are you currently obsessed with?  A book? A movie? An idea? A song? A project? An activity?  Write all about it ."

Here is Christy writing about her obsession with her plant choices in the yards of her new house here.  I expect once Bill returns from his trip to the Commonwealth of Massachusetts, he will share with us one of his obsessions.

I told her I would have to think about it.  So while we were in Moscow, I needed to get my steps in, so I went to the University of Idaho Arboretum, and thought maybe I could come up with an idea for an obsession while walking through the botanical gardens. 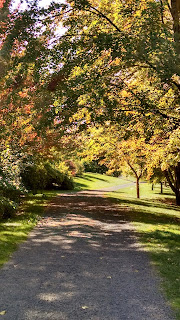 Well, I didn't come up with any ideas on Tuesday, so I thought maybe I'll think about it while walking around the backyard on Wednesday to get more steps in for the day.

On Thursday, I made quite a few "loops" around the halls at Kellogg High School to help get my steps in for the day.  You see, I found out that if I begin at my office, go down senior hall, take a left and go past the gym doors, take a right and go down past the shops classes (or "skid row" as it was called back in my day at KHS), then up the stairs, down the halls of the Science Wing, down the stairs, past the Band/Choir room, through the cafeteria, again through Senior Hall and back to my office is about 500 steps.  My goal is to do that each period throughout the day.  7 periods equals 3500 steps!!

Well, no idea for an obsession as I looped through the halls of KHS.

On Monday, a Facebook friend posted this article about having a Fitbit, and some of the article hit home.

Then the lightbulb came on!!! 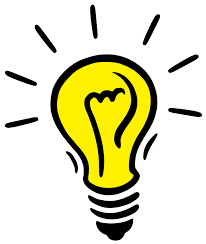 My obsession recently has been getting 10,000 steps in each day, which is monitored by my Fitbit. 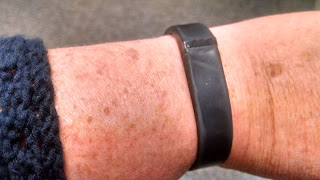 This obsession has changed my thinking, my schedule, and the way I approach life.

I now figure out things to do to help me get in my steps on a daily basis.

Our trips this last summer included hiking, long walks through parks, and walking breaks while driving on the road.

I know how many steps there are around the circumference of my backyard (200 steps).  It was much more pleasant during those hot evenings of summer to walk around the backyard than going out walking around the neighborhood, because I think our backyard was usually about ten degrees cooler.  I have walked around my backyard so many times this summer, I have worn a path in the lawn. 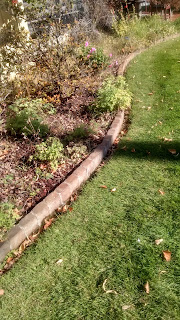 Instead of sitting and binging on Netflix, and create a walking route around the couch and dining room table to get more steps in for the day, but still in view of the television.

I can walk and watch a show on my Kindle Fire, both at the same time, while walking around my backyard.  I think I watched a whole season of  "Blue Bloods" this way.

Slacker Radio has become my friend.  I have it on my phone, I pick a "station" and get a variety of music to listen to as I step around the backyard.  One of the more unusual stations was the Countdown of Rock Songs that used the Cowbell in them.

(Oh, can you excuse me a moment?  It is time to do my inside the house loop.  This morning, I figured out if I start in the living room, go down the hall to my bedroom, come back and go around the dining room table and the couch by the TV, go through the kitchen, go down the stairs to the basement, walk around the main room in the basement, and come back up the stairs to the living room, it is about 162 steps.  If I make this loop three times, I am close to 500 steps.)

Another feature of the Fitbit that adds to the steps obsession are the "Challenges".   My walking buddy Nikki started challenging me.  For example, this week we are doing the "Workweek Hustle."  Other challenges include "Goal Day", "Weekend Warrior" and "Daily Showdown". 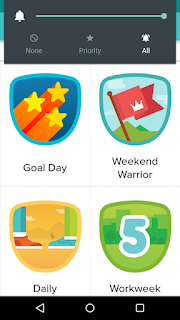 Currently I am 61,329 steps for the week, and Nikki is at 50,822.  But she hasn't synced her Fitbit in 12 hours, so you don't really know where she is at today for steps.  I know she is at least 5,000 more steps ahead of this number from our walk this morning.  I'll keep checking her numbers throughout the day.  (Yes, another obsession...checking your challengers steps.  But I tell you, it is a great motivator!!) 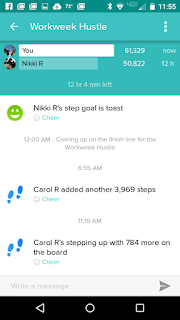 Let's see.  I just synced my Fitbit, and currently I am at 7,932 steps for the day.  I had better get off the computer for a while and get moving.

After spending some time on the Oregon Coast last month, a flood of memories came back to previous visits, so I posed this assignment to my two siblings:

Write about some of the memories you have when we all gathered at the Oregon Coast and share those memories and stories in your next post.

We have stayed many places on the Oregon coast over the years, but I think the one that is the most near and dear to my heart is the first place I experienced time on the coast, and that is Yachats.

The first time we went was the summer of 1982, the year after my first year in college. 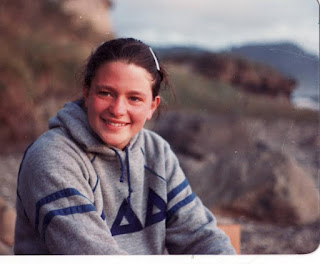 We stayed in a small ocean front cabin in Yachats.  My brother knew the owners and made arrangements for us to rent this cabin.

That first year included a six hour trip on a fishing boat, that you can read more about on a former blog post here, playing Monopoly and singing "New York, New York" everytime someone landed on that place on the board, and doing a lot of exploring in the tide pools on the beach in front of our cabin.

We returned again the next summer, the summer of 1983. 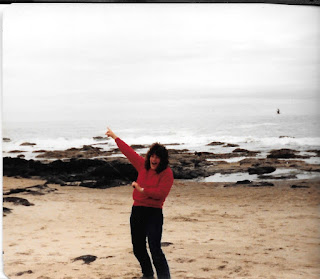 This summer I apparently bought a kite to do some kite flying.  I also remember writing a message to Paul in the sand and photographing the message.  (This way WAY before the days of digital photography you could instantly text or post on social media.)

It was fun being on the coast with Dad, the "Old Man and the Sea". 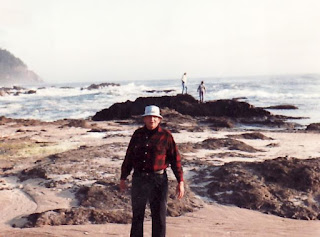 The next time I visited Yachats was with Paul, and it was the summer of 1986, on our honeymoon.  It was wonderful to share this special place with my husband.  We enjoyed a few wonderful days on the beach, including smelt fishing.


﻿ As our family grew, we outgrew the cabin, and also visited other towns on the coast.

But I have been fortunate to visit Yachats recently.

During the fall of 2013 I had the privilege of visiting my brother and his wife Debbie before they moved to their new home in Maryland.  On one of the days I was there, Bill and I took a trip to Yachats and took some time to walk around the cabin we used to stay at I Yachats.


This last summer, Paul and I were able to show two of our daughters the beach at Yachats, and we also took a stroll by the little cabin where we used to stay.


The memories started in this place back in 1982.  I was 19 years old.  Not only was this my first summer of many summers in Yachats and the Oregon Coast, but it was the summer Paul and I fell in love.

Four years later, we spent some of our first days of our married life in Yachats.

And now, it is 2015.  Paul and I have been together 33 years, and celebrated our 29th anniversary this summer.  We were able to spend some time on this special beach in Yachats, and, for me, it stirred up many fond memories of family vacations spent at that special little cabin overlooking the ocean.

As I reflect on these past 33 years, I realize how blessed the times on the coast have been, and how blessed I have been to have Paul by my side, helping me make and share those memories.