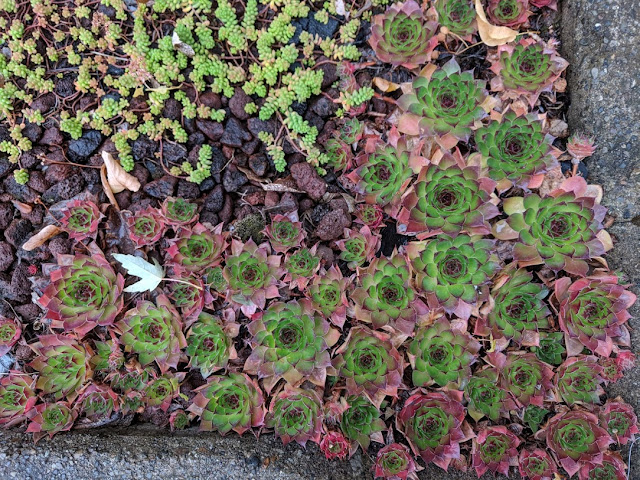 *The sun came out, and so did the people in Wallace!!  It was a pretty busy day at the mine tour, and people were loving being in the sunshine today.  Don’t you love how sunshine brightens up a day?

*I stopped at Bill and Debbie’s house on the way home, hoping to pick up a bag of apples.  Upon my arrival, I found out Debbie had already delivered them to my house.  That was okay.  I wanted to visit with Debbie some before she headed back east to visit her kids and grandkids for a few weeks.  We had a good visit, and I wished her well on her travels.
*For dinner I melted some butter in a pan, cut up some cabbage I had harvested from my garden, and sliced some of the apples I had received from Jane McShane (thanks Jane....they are delicious!!), and sauteed them together, then added some beef sausage to heat it up, and what an enjoyable fall feast for Paul and I to enjoy!!
*Lois Dahlberg hosted our P.E.O. meeting, and it was wonderful.  Dawn Arnhold McLees shared a program about the seeds we can sow in our heart during the winter months, such as hope, seed money, and helping others.  It was a very uplifting program.
*After the meeting I was visiting outside before I got in my car, and this young man approached me and my friend, asking if we had an I-Phone charger.  His phone was dead, and he was trying to get a hold of his parents. Neither of us had a charger. He then asked if one of us could give us a ride down to the city park.  I was driving right by there on my way home, so I said I would be happy to give him a ride.  As he got in the car, he said his parents told him he shouldn’t get in cars with strangers.  I asked him if he attended Kellogg High School.  When he said yes, I asked him if he knew Mr. Roberts.  He said he did, and when I told him that was my husband, and that I used to work at KHS,too, he felt much  better.  He also talked about his uncle, a student who was Zoe’s age, and had been in my first Gear Up program.  When we arrived at the bottom of Hill Street, his parents were just driving up, and all was well.

Created by Carol Woolum Roberts at 9:16 AM