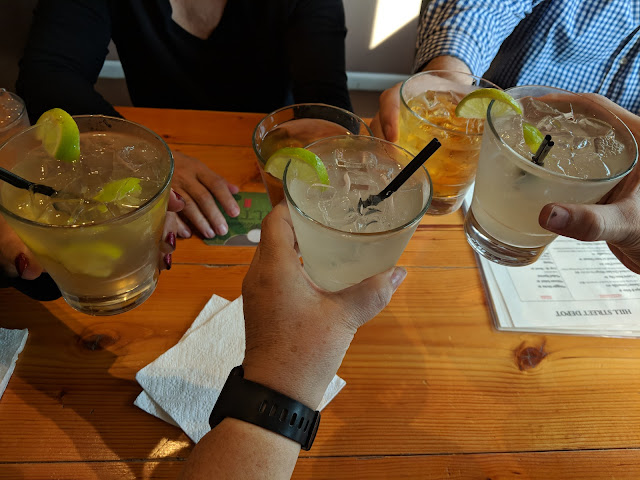 *Happy Birthday to my youngest daughter Cosette Laurie Christine Roberts!!  She turns 23 years old today.  How can that be?  We are going to celebrate this weekend when the family will all be together for a family wedding in Nampa.
*The morning began teaching Zhang Zhi Yu, an 8 year old boy from China.  This was another trial class, but the cool thing was, later in the day, I was notified that they signed up to do VIPKID, so I get an extra bonus for them signing up.  I hope I will get to teach him in the future.  He was a great kid.
*Today was the first time in a long time my brother Bill Woolum, sister Christy Woolum and I were able to have a sibling outing.  Today the outing was to honor our mother, who passed away a little over a year ago.
*The outing began visiting mom and dad’s grave at the cemetery in Kellogg.  Christy had purchased a potted mum to put on their grave.
*Then we drove to Rose Lake junction to have breakfast at the Rose Lake Restaurant. I enjoyed patty sausage, two eggs sunny side up and some hash browns.
*After breakfast we piled back in Christy’s Jeep and drove to Coeur d’Alene.  We dropped Bill off to get a haircut, then Christy and I went to Shopko and Michaels.  We picked Bill back up, grabbed some drinks at Starbucks, and headed to Spokane.
*In Spokane, we visited Manito Park.  It was very beautiful at the Duncan Gardens, and I got some ideas for perennials I made want to plant for next year in the perennial garden.
*Bill volunteered to find us a place for lunch, so he chose Perry Street Brewing in the Perry District in Spokane.  I had always wanted to check this area of Spokane out, and it was fun to see the funky little shops, and the lunch was very good.  We lifted our glasses to toast Mom.
*Upon our arrival back in Kellogg, we met at The Hill Street Depot, and Debbie and Paul joined us.  Again, all five of us raised our glasses in a toast honoring Mom.

Created by Carol Woolum Roberts at 6:17 AM