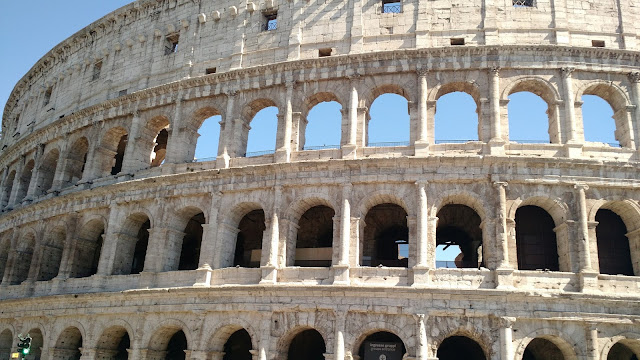 *Today we spent 8 hours in Rome. The temperature was 95 degrees.  In that 8 hour period we walked over 7 miles.  Quite an incredible day.
*We left Villa Magnolia at 5:30 a.m. and Eric drove us to La Spezia.  On this type of train you are assigned seat, and April and Tina were in Carriage 8, the second to the last car, and Kellee and I were in Carriage 9, the last car.  People started running to get on the train, so we did, too.  What did we know?  Later we realized we could have got on the train anywhere, and walked through it to our seats.  When I arrived on the train and went to sit in my seat, there was someone in my seat sleeping.  So I joined Kellee back where she was sitting, and spent most of the trip sitting by her.  At one point, a business man with a laptop moved over to work next to me (the trains have two seats, one on the aisle, one by the window, facing two other seats with a table in between.)  He didn’t like the sun coming through the window so he lowered the shade.  So much for seeing the beautiful Italian countryside!
*At one point I got up and returned to my assigned seat for the rest of the trip.  The sleeping passenger had departed the train.
*We arrived in Rome around 10 a.m.  We knew we had to purchase a ticket to ride the subway, so we all did that, found the right platform and waited for the A train.  Well, we weren’t paying attention and got on the B train.  So off at the next stop, and then up and around, paying for another ticket, then we got on the right train to the Vatican.

*As we made our way toward St. Peter’s Square, the crowds increased.  We had purchased a Rome City Pass so we had to go pick it up in a small office by the square.  After a few attempts to find the office, we finally found it and got our passes, then headed toward the Vatican Museum entrance....again after a few failed attempts to go in the right direction.  Once in the Vatican museum we took the shorter itinerary that gets you to the Sistine Chapel quicker.  The Sistine Chapel was smaller than I anticipated.  But the paintings on the ceiling were magnificent.  I wish I could have sat and really looked at them better.

*We left the chapel and walked through more halls of artifacts and sculptures and artwork that was amazing.

*After a quick lunch in the museum, we went outside. The plan was to go see the Colosseum.  We walked for about 15 minutes to get on the Hop on Hop Off tour bus.  It took us by a few sites, and we got off at the train station, where we once again took the subway to the Colosseum.  It was so awe inspiring.

*We left, got back on the subway, and back to Roma Termini (train station) and grabbed a quick bite to eat and got on our return train at around 6:30 p.m.  I was hot, sweaty, my feet hurt, but I did get so spend about 8 hours in one of the most beautiful cities in the world, and see some of the most incredible things in the world, and share it with three very wonderful people.  So despite all the twists and turns we experienced, it was a good day.

Created by Carol Woolum Roberts at 1:20 AM