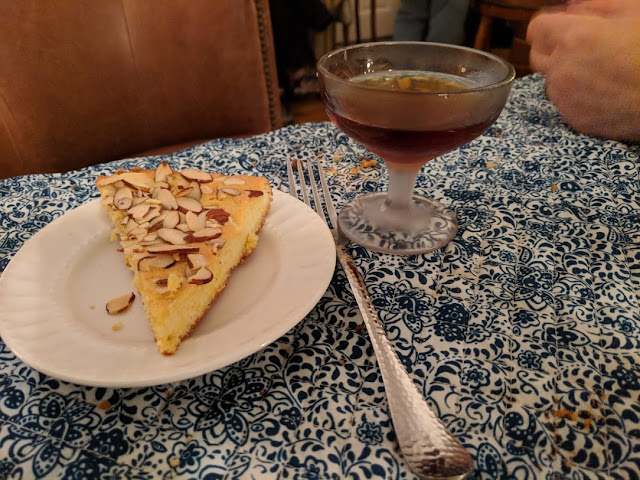 *What an awesome message Pastor Dave delivered at church this morning.  It was based on the story of Jesus being tempted by the devil in the wilderness.  Some of it had to do with our own temptations, and how all temptations are not necessarily “guilty pleasure”, but some of our temptations can be good things, such as the devil tempting Jesus with bread.  But we need to make sure that we are not tempted to put, even the good things in our lives, before our relationship with God.  That should always come first.
*Paul, who I now think of as my own private chef, whipped up another delicious egg dish with eggs, onions, Rotel Tomatoes and mozzarella cheese.  Oh my goodness, was it good.
*Christy spent some time perusing her rather large Ina Garten Cookbook collection to create tonight’s menu for family dinner.  The evening began with a French 75 cocktail and Gorgonzola crackers.  For dinner, we had a chopped salad and Beef Bourguignon.  For dessert, we enjoyed an Olive Oil Cake and some Amaretto Liqueur to dip it in.  Bill Woolum dominated the conversation tonight talking about the incredible come from behind victory that the St. Johns men’s basketball team had against Villanova.  (In fact, he wouldn’t shut up about it.)  We also talked about Bill Walton and how he got to where he is now as a ESPN sport’s announcer.  The conversation also went to talking about Chris Mullin, the now coach of the St. John’s Red Storm basketball team.  (Apparently I saw Chris Mullin play basketball back in 1984 when I attended one of the USA men’s basketball games at the 1984 Olympics in Los Angeles.) This was referred to as “The Dream Team”.  I looked up some information on that team, and found out...
It was the last amateur U.S. team to win an Olympic gold medal in men's basketball. The team was considered one of the strongest in U. S. history as it featured four of the five 1984 consensus first team All-Americans in Michael Jordan, Patrick Ewing, Wayman Tisdale, and Sam Perkins.[1] The talent pool for the U.S. team was so strong that Charles Barkley and John Stockton — future first round picks and hall of famers — did not make the roster.
*I had a wonderful visit with a very good friend who is going through some tough things in life.  But, if truth be told, this could describe a list of at least five of my close friends who are all going through some really tough things.......so I fall to my knees and pray.

Created by Carol Woolum Roberts at 10:13 AM