Yesterday, between performances of "You're A Good Man, Charlie Brown" and prom festivities, and preparing a big family dinner, Paul and I went and sang at a funeral.

The funeral was for a Silver Valley "old-timer" who lived a long, full life.  He was 90 years old at the time of death.

As we sat waiting for the funeral to begin, they played music which I assume were some of this man's favorites.  One of the songs they played yesterday was "Misty", one of dad's favorites.

It reminded me of my own dad's funeral.

Right around this time, 18 years ago, we were told that my dad had cancer, and he probably only had about a month to live.

And that prediction was correct.  He lived about a month after the diagnosis.

As we planned Dad's funeral, we recorded some of his favorite music on a cassette tape to be played before the service.

There were a few similarities between dad and this man.  They both worked at the Bunker Hill Zinc Plant.  They probably worked there at the same time, and knew one another.

They lived for all, if not most of their lives in the Silver Valley.

But this man was able to live to 90.  Unfortunately, my dad's life was cut short, way too short, and the young age of 65 years old.

The service ended with a slide show of this man's life, very well done.

A wonderful tribute to this man's life.

As was my dad's funeral.  It was a wonderful tribute to my dad's life. 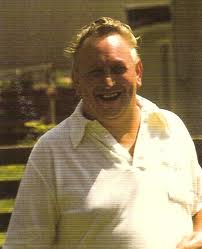 Often you don't realize how far reaching a life has touched until they have died.  After the service, as the cards and flowers and plants started coming to the house, I was amazed at how far reaching my dad's life was here in Kellogg, and beyond.  He was a Silver Valley native, and lived here most of his life, and loved calling Kellogg his home.

Dealing with someone's death is hard.  But we will all experience it at some time or another.

Grieving all the things I could have learned from him as an adult.

But he is always present at family gatherings in one way or another.  I think I sense him the most at Christmas....because of the many things he did at Christmas such as make the "Tom and Jerry" batter from scratch.

And he lives in children, and his grandchildren in small little ways that we glimpse every now and then.

So Dad has never totally left us.

His presence will always be felt in one way or another.

your dad was such a delightful human being, and i am so happy to have known him. thinking of you as you think of your dad.

Beautiful words about your dad and about the grieving process. I still have moments of grieving for the loss of experiences and time with mom, who also left us at 65 years old. Way too soon, in my opinion. And, like you, I still sense her presence, in my sis and I, in our children. Sometimes I laugh and it's her distinctive "cackle" that comes out. I used to tease her about that! Her spirit is palpable at times, and brings me joy and comfort. I am so enjoying your writing!

Very touching post. I'm glad you posted a picture your dad (handsome!) as I've only heard the great stories through friends. Special.

Very touching post. I'm glad you posted a picture of your dad (handsome!) as I've only heard the great stories through friends. Special.