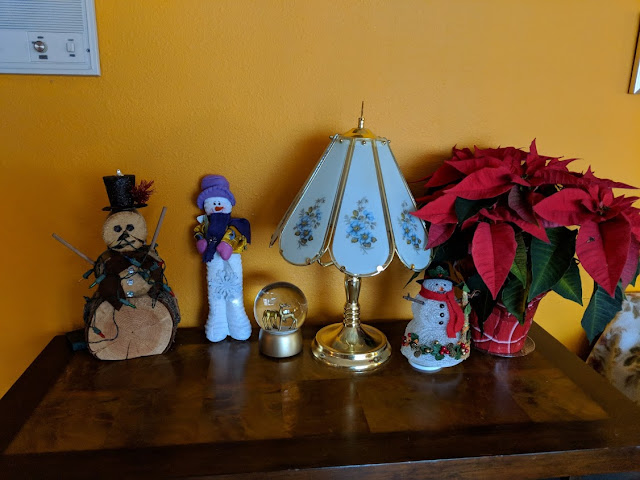 *It was time to return to work today.  I am not sure anyone, teachers, staff or students were ready to be back.  But it is part of the circle of life of the school district calendar.  Christmas vacation must come to an end, and we have to return.
*I spent most of the day in my office working on little things here and there, and starting to plan out the rest of my schedule for the school year.
*Actually arriving at Kellogg High School was a bit delayed today.  Since acquiring Mom’s car, this has not been a problem.  But Cosette had borrowed that car to go spend some time with her friend Sidnee in Spokane.  So we only had the Chrysler.  We only have one set of keys to the Chrysler.  And when those one set of keys are in your husband’s coat pocket at KHS, because he walked to school and didn’t need to use a vehicle, it makes it rather difficult to drive to work.  So I called him on his phone, (his new smart phone), but he didn’t pick up.  Then I called him on the school phone and finally got through.  Within in the next 10 minutes or so my knight in shining armor arrived at the house with the keys to the car.  So it all worked out.
*By the end of the workday, Paul and I were both tired.  I caught myself with eyes closed as I was looking at my computer screen.  It hit Paul during his last period at the end of they day.  Just part of the process of getting back to work.
*This evening I finished the show The Marvelous Mrs. Maisel, an original series on Amazon Prime.  If it from the same creator as The Gilmore Girls, but this show definitely has a different feel to it...let’s just say Mrs. Maisel is a little raunchier than the Lorelais.  And I don’t usually enjoy raunchy....but this show I like.  I can’t wait for the next season.
*Paul and I also started the next season of The Crown, which is an original Netflix series.  This show chronicles the life of Queen Elizabeth II.  It is very well done, and I love learning things about history that I didn’t know, or had forgotten if I did know at some time in my life.
*It was nice to be home in the evening, relaxing, and just kind of vegging out.
Created by Carol Woolum Roberts at 7:34 AM

I am so glad I re-found your blog. I used to read it all the time and then for some reason I stopped and then I forgot about it -- I Also was a faithful reader of both your brother and sister and I have neglected all of you. Today I stumbled on it again and started reading and couldn't put it down. For some reason I knew your mother had passed so I went back to the beginning of July and started reading and read up to date. What an enjoyable read. I offer my heartfelt sympathy to you and your family and brother and sister in the death of your mother. Your poignant memories of your mother and your family brought a lump in my throat and a tear to my eye as I remembered my own mother who passed away 9/2/1992. Weare always sad at losing our loved ones and especially our mothers but we can relive the memories over and over again. It helps to keep them close to us. I thoroughly enjoyed your descriptions of the Sixth Street Melodrama Theate. I remember way back in the early eighties when the Kellogg Troupe performed Dancin' On Silver written by Tim Rarick. We drove from Coeur d'Alene to see it. It was very enjoyable. This is getting way too long but i am so glad I found you again!!!

Thanks for leaving this comment Jenny. I am glad you found my blog again, and that you enjoyed reading it again. I appreciate you taking the time to let me know!! Glad to reconnect with you again.