Today at church we celebrated Palm Sunday, the beginning of what Christians celebrate as Holy Week.

On Palm Sunday, we wave palm branches, and sing "Hosanna to the King of Kings", just like they did over 2000 years ago in Jerusalem when Jesus rode through town on the back of a donkey.

Jesus Comes to Jerusalem as King

21 As they approached Jerusalem and came to Bethphage on the Mount of Olives, Jesus sent two disciples, 2 saying to them, “Go to the village ahead of you, and at once you will find a donkey tied there, with her colt by her. Untie them and bring them to me. 3 If anyone says anything to you, say that the Lord needs them, and he will send them right away.”
4 This took place to fulfill what was spoken through the prophet:

5 “Say to Daughter Zion,
‘See, your king comes to you,
gentle and riding on a donkey,
and on a colt, the foal of a donkey.’”[a]
6 The disciples went and did as Jesus had instructed them. 7 They brought the donkey and the colt and placed their cloaks on them for Jesus to sit on. 8 A very large crowd spread their cloaks on the road, while others cut branches from the trees and spread them on the road. 9 The crowds that went ahead of him and those that followed shouted,
“Hosanna[b] to the Son of David!”
“Blessed is he who comes in the name of the Lord!”[c]
“Hosanna[d] in the highest heaven!”
10 When Jesus entered Jerusalem, the whole city was stirred and asked, “Who is this?”
11 The crowds answered, “This is Jesus, the prophet from Nazareth in Galilee.”

But then things changed.  This morning in church, Pastor Dave talked about how the crowd was praising Jesus one day, and saying "Hosanna to the Son of David!"

But a few days later, the crowd mentality has changed, and then they are yelling, "Crucify Him!!"

This is a few chapters later, in Matthew 27:

20 But the chief priests and the elders persuaded the crowd to ask for Barabbas and to have Jesus executed.
21 “Which of the two do you want me to release to you?” asked the governor.
“Barabbas,” they answered.
22 “What shall I do, then, with Jesus who is called the Messiah?” Pilate asked.
They all answered, “Crucify him!”
23 “Why? What crime has he committed?” asked Pilate.
But they shouted all the louder, “Crucify him!”
24 When Pilate saw that he was getting nowhere, but that instead an uproar was starting, he took water and washed his hands in front of the crowd. “I am innocent of this man’s blood,” he said. “It is your responsibility!”
25 All the people answered, “His blood is on us and on our children!”
26 Then he released Barabbas to them. But he had Jesus flogged, and handed him over to be crucified.

One of the original examples of mob mentality.  Following the crowd.

One day, they all loved Jesus.

A few days later, the crowd was swayed....and Jesus became a worse criminal than Barabbas, who was a notoriously bad criminal at the time.

I know I try not to do that, to get caught up in mob mentality.  But sometimes it is hard.  Sometimes people start talking, and you just get caught up, and usually it is in a negative way.

One example that comes to mind is being with a group of people who may not particularly like someone, and the more negatively you talk about that person, the worse and worse you begin to feel about them.  Not a great things to do, because often the things you hear from others may not be true anyway.  And kind of takes away from the "Love your neighbor", thing, too.

When you work around teenagers all day, like I do, a phrase you often here is, "There is so much DRAMA!!"

Drama is kind of a mob mentality thing.  The more people talk about a certain situation, and the more they get others involved and spread the news, the more DRAMATIC it becomes.  If have heard many students say they are ready to graduate from high school, so they can leave the drama.

What we say is important.  How we say things is important.  We need to think for ourselves, not just follow the crowd.  If there is an important cause you believe in, and you are passionate about it, by all means, stick up for your beliefs and speak out.

But don't just follow the crowd or say things, because everyone else is doing it.

Dr. Martin Luther King Jr. had a lot to say about doing what is right.  Here is one quote of his I like: 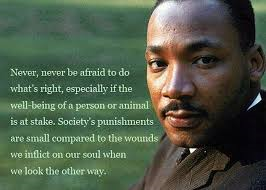 Never be afraid to do what is right....we all want to have healthy souls.
Created by Carol Woolum Roberts at 10:45 PM