I started grade school at Sunnyside Elementary School in Kellogg, Idaho in the fall of 1969.  I was six years old.  I would spend the next six years at this school.

The principal during my six years at Sunnyside Elementary was Mr. Koepl.  He was a very tall man, way over six feet tall, which can be rather intimidating for a grade school student.

When I was in first and second grade, we had our own playground.  Now the third graders came onto our playground for a little while during lunch, but then, at a certain point, we would yell "third graders on the other side", and they had to go over to the big playground. 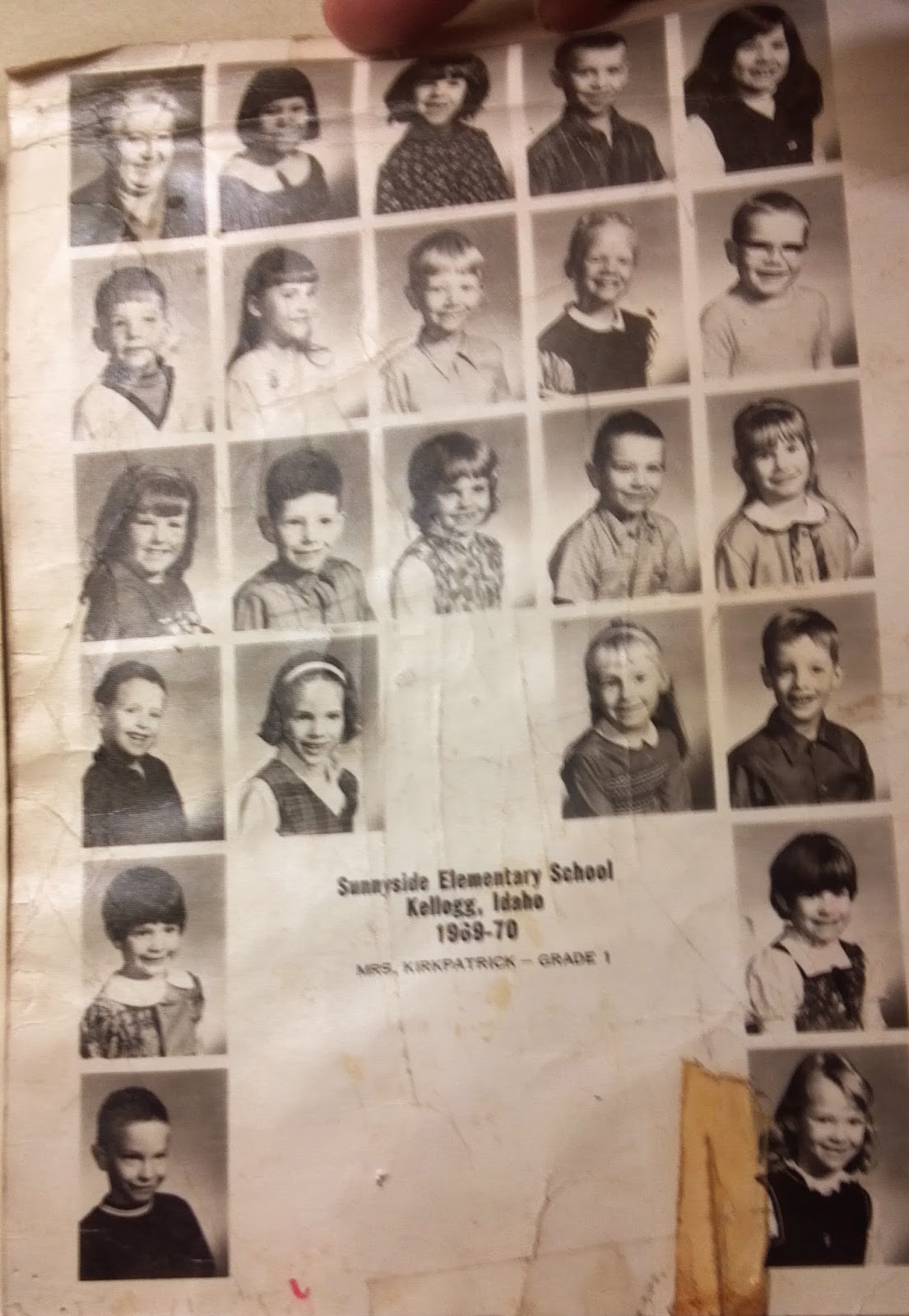 In first grade I had Mrs. Kirkpatrick. 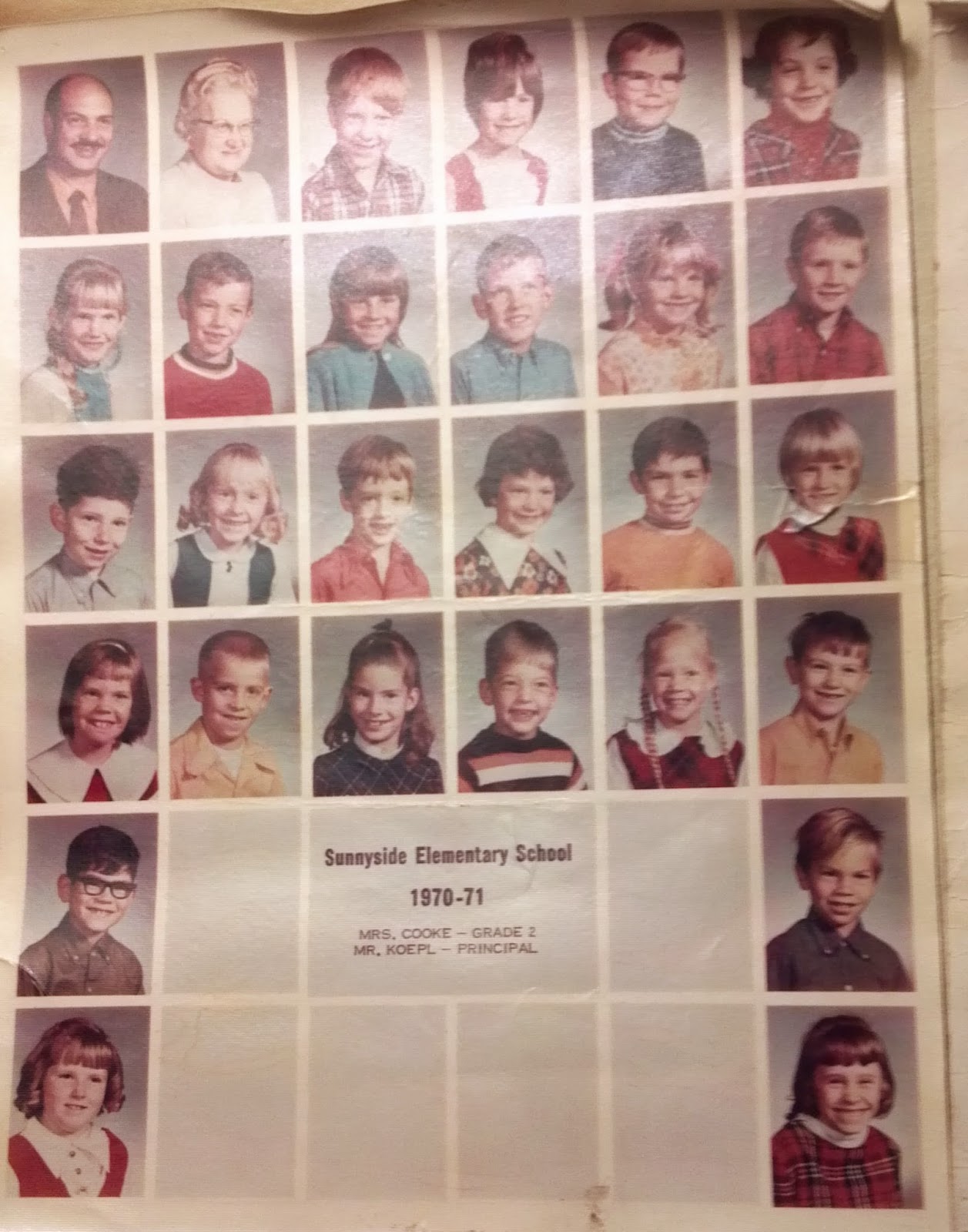 In second grade I had Mrs. Cook. 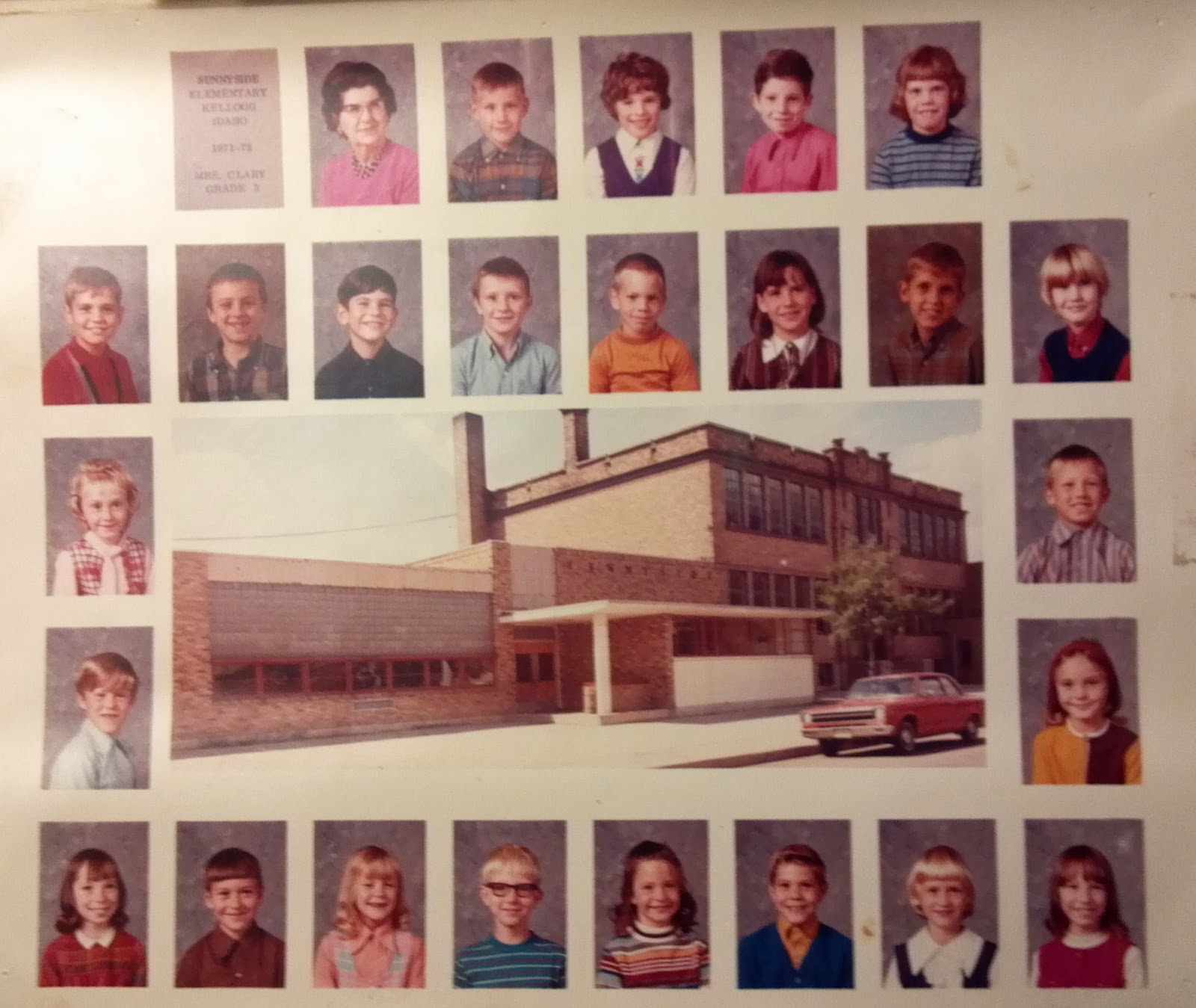 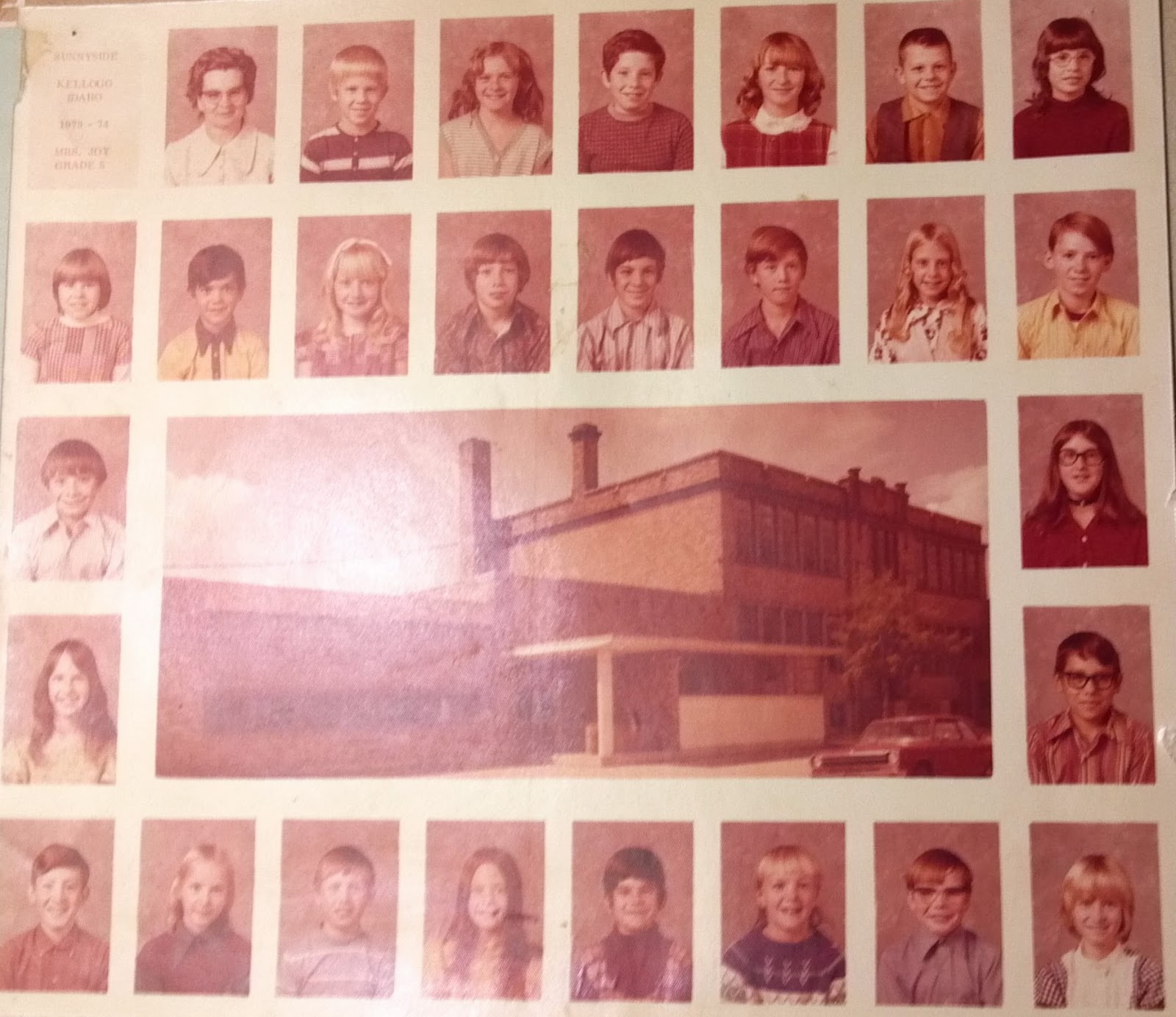 In fifth grade I had Mrs. Joy. 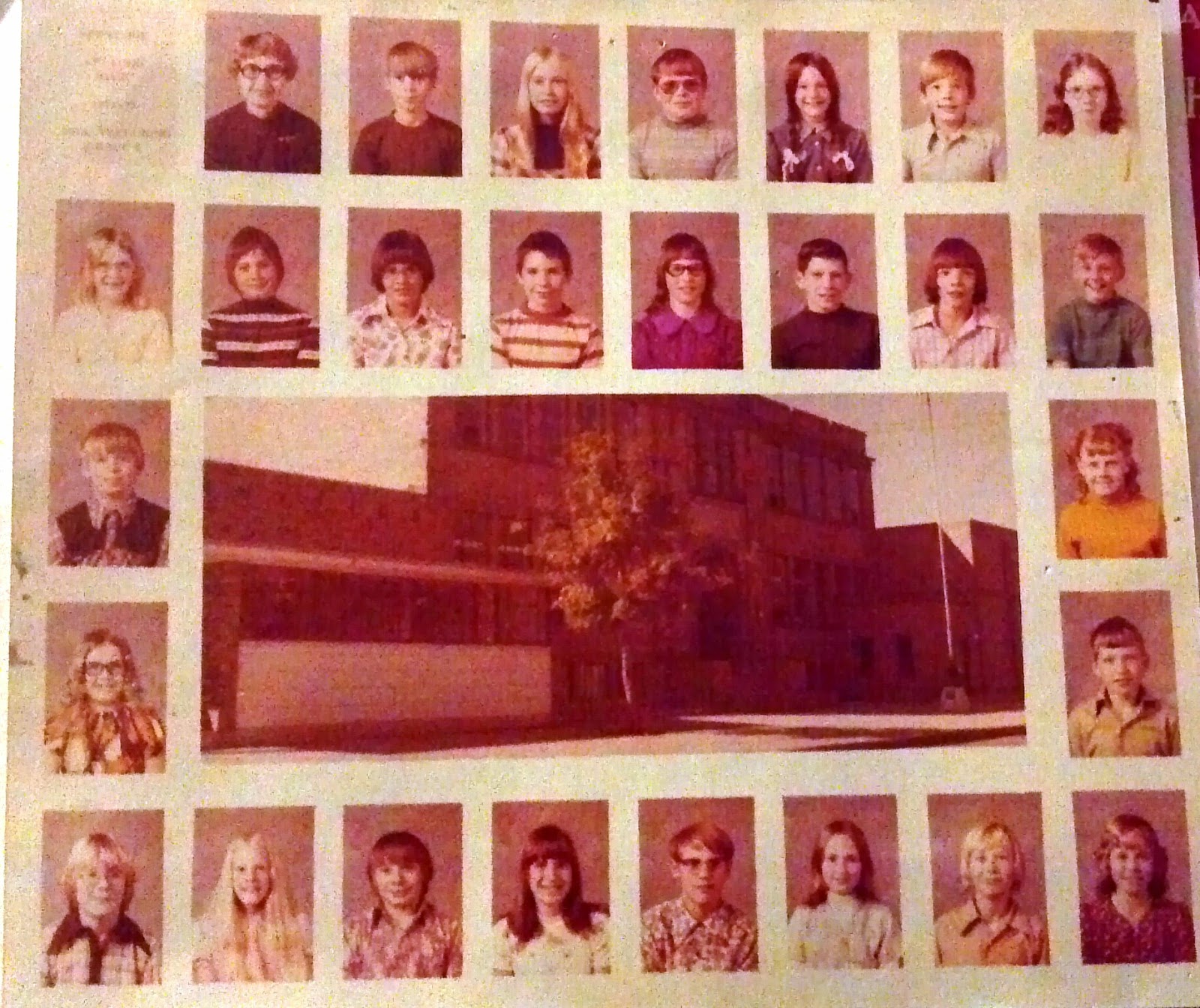 In sixth grade I had Mrs. Tregoning.
She retired after my sixth grade year.
Overall, my years at Sunnyside Elementary School were very good.  I had good teachers who I learned a lot from.
Here are some of my memories that stick out:
--A burning taste in my mouth while playing on the playground during morning recess due to the smelter smoke in the air.
--Mungee Day...a dress up day during sixth grade.
---Three classes of fifth graders, and three classes of sixth graders.  There were a lot of us at Sunnyside!!
--A rift between the girls the started in fifth grade, and carried on into the sixth grade.  I think by the end of sixth grade, it was resolved.  If memory serves me right, it had something to do with kids smoking on the playground!!
--I remember being followed home by two of the girls from the other side of this conflict to my friend April's house.  These girls wanted to fight us.  We wouldn't do it.  I made it through my entire 12 years of school without ever getting into a fist fight with another girl.  Not everyone at Sunnyside Elementary can say this!!
--I always ate hot lunch.  I thought the kids who got to bring cold lunch were so lucky!!
--Mrs. Clary read the best books to the class.
--I was very chatty in grade school, and was sent out into the hall more than once.
--I always walked to and from school.  It was about five blocks.
--The Sunnyside Elementary School building now houses part of Dave Smith Motors, one of the largest (by volume) car dealerships in the country.
--I remember getting some kind of vaccination during school, and the boy in front of me in line fainted.
--I was playing on the bars once and fell off on my head....ouch!!
--Tether ball was always a popular choice on the playground.
--Giant strides....another popular playground item.  I think they have banned them from playgrounds.
--When I first started school, the rule was we had to wear dresses.  But you could wear pants under the dresses.  Eventually, the dress only rule was changed, and we could start wearing pants.  Thank goodness!!
--I had sloppy handwriting.  I did good in reading.  Math, not so much.
--I remember having the memorize the poem "Daffodils" by William Wordsworth and reciting it in front of my sixth grade class.
--In sixth grade we could be crossing guards in front of the school.
--"White Ruff", "Where the Red Fern Grows", and "Charlotte's Web" were a few of the books I remember teachers reading to my class.
Oh, I could go on and on, but I was very blessed to be at a school for six years, and have such a rush of fond memories.
﻿
Created by Carol Woolum Roberts at 10:59 PM