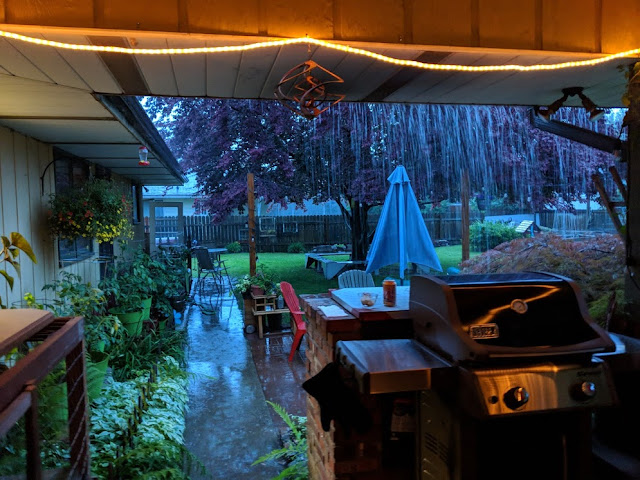 *Happy first day of summer!!
*I spent some time making my head hurt filling out paperwork for retirement.  It really wasn’t that many pages, or that bad at all.  But it still made my head hurt.
*In my Keto Zone cookbook, there is a recipe for Seed Bread.  Paul had gone to Coeur d’Alene about a week ago or so and purchased all the various seeds that go into making this bread.  So I gathered all the various ingredients.  Most of the seeds have to be ground up.  Fortunately my coffee grinder is the perfect tool to grind the seeds.  Once all the seeds were ground up, I mixed them all together with a few dry ingredients, and with water, ghee and coconut oil.  Then it sat in the bowl for about three hours.  Then you bake it in a loaf pan for over an hour.  It was nice to cut the bread while it was still warm, and put some butter on it and eat it. This is the first kind of bread I have eaten since March 1.  I probably won’t make it a lot, but it was nice to have as something a little different.

*It is Thursday, and that means the Kellogg Farmer’s Market is open.  I kept getting notifications on my phone that we were in for torrential rains and flash flooding.  But when Paul and I walked down to the market around 5:30, the weather was perfect, and the market was in full swing when we arrived.  My friend Christina, who sells beautiful jewelry at the market, said she had been praying all day for the rain to stay away.  Her prayers were answered!!  After walking through the market, we zeroed in on our two favorite places, the local cheese makers.  We purchased some marinated feta and some marinated mozzarella.

*On our way home, we noticed Excelsior Cycle was still open.  Paul had stopped in there to look at some bicycles last week.  We purchased bikes from them back in 2001, the first summer after we moved back here.  After having those mountain bikes for about 17 years, we thought it might be time to invest in a more bike trail friendly kind of bike for us to ride on the Trail of the Coeur d’Alenes.  The owners, Mike and Debbie Domy were more than happy to let us take a couple of the bikes on a test ride.  The bike I rode was very comfortable and Paul likes the feel of his, too.  I think Paul and I may have some new bikes in our future!!
*We arrived home and Paul grilled some fish and some Romaine lettuce, and I roasted some radishes, and I sliced some seed bread to spread some of the new cheese we had purchased.  We also still had some of the Labneh lemon cheese left from our purchase two weeks ago, and we spread some of that on our fish.  It was delicious.
*Again, my phone kept alerting me to the fact a storm was coming.  As we sat on the patio, we watched the storm roll in, and started hearing the thunder.  By the time we were done eating, the rain started falling.  We had quite the downpour!!  I loved it!!

Created by Carol Woolum Roberts at 7:44 AM