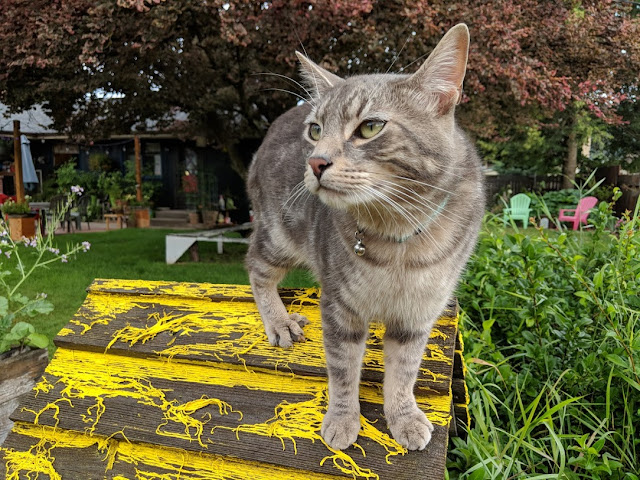 *This morning began in my office making a video to submit to VIPKID to see if I will be qualified to be a Level 1 teacher only.  I had to create a 9-10 minute video showing me teaching a student a lesson online.  They said I would know in 48 hours if I passed.
*As part of our cat Clark’s routine each morning, he goes outside when Paul starts the sprinkler system.  Then sometime after 6:30 a.m., he comes back into the house, and makes a beeline for Paul, who is sitting in the living room.  This is so Clark can get some love from Paul by getting petted and scratched.  It happens every morning.  It is so cute.
*A family came to the mine tour today.  There was a young man in his twenties, and his two parents.  They were inquiring about the tour, and wondering if the 86 year old grandpa could do the tour or not.  The finally decided it would be too much for grandpa.  But grandpa doesn’t speak English, so they were concerned about leaving him alone at the mine tour building.  But they bought grandpa an ice cream cone, and he sat at one of the tables in the ice cream parlor eating his tasty treat while the rest of the family went on the tour.  When he was done with his cone, he walked outside for a bit, then he returned, and sat back down at the table in the ice cream parlor and waited for his family.  When the rest of the family returned, I asked the grandson what language his grandfather spoke.  He spoke Russian.  He was here visiting from Russia.  The grandson lives in Coeur d’Alene, and his parents live in the Seattle area.  The grandson asked if anyone from Russia had been to the mine tour.  I said I had met people from all over, but I am not sure if I had ever met someone from Russia.   I am sure that grandpa had many interesting stories to tell.
*When I arrived home, Paul was finishing up installing our new kitchen sink faucet and sprayer.  He performed the wedding today of Steven Charles Johnson and Ashley Braley at Higgins Point in Coeur d’Alene, then did some shopping on his way home. He had started the kitchen sink project in the morning, then finished it up as I returned home.
*Paul grilled some chicken drumsticks on the grill, and I picked some ripe tomatoes, pinched off some basil, and opened up some fresh mozzarella, and mixed them together.  Then I put some olive oil, red wine vinegar and salt and pepper in the bowl, and mixed them all together, and had a wonderful Caprese salad.  I also sliced up a zucchini Tina Marshall had brought me last week, added some mushroom and cherry tomatoes, and some oil and vinegar and Paul grilled those as well.  It was a wonderful meal.

Created by Carol Woolum Roberts at 7:02 AM