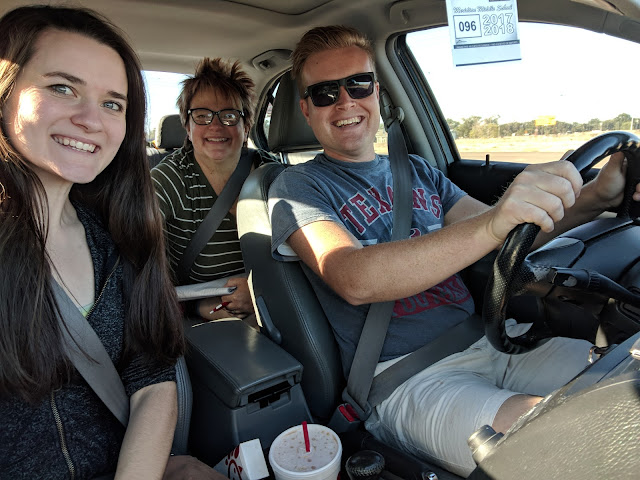 *I woke up bright and early this morning to finish packing and jumped in Zoe’s car for the ride back to Kellogg.  Zoe arrived promptly at 7 a.m., and we loaded up my things, and headed to pick up Jason, who would be driving to Kellogg with us to spend the week.  It was a wonderful weekend in Meridian seeing friends and family, and I am so glad I made the trip.  I spent nine years of my life in that community, and the relationships I built during that time are still very special to me.
*Jason took over driving duties after we stopped to fuel up the car in Caldwell, and we were off.  We drove through Oregon and Washington.  It was a nice, cool traveling day which was nice.  Zoe, Jason and I are all fans of Malcolm Gladwell’s podcast Revisionist History, and the third season was recently released, so we listened to all of the new seven episodes. Some of the episodes included a constitutional semicolon, asthma in Pennsylvania coal miners, two episodes on memory, and how we often remember things differently than they actually happened, how a retired Marine Corps general changed the way America dealt with immigrants coming from Mexico, (this was especially enlightening because of current events), Sammy Davis Jr., and his journey as one of the first popular black entertainers, and Malcolm Gladwell’s 12 Rules for Life.  I think I dozed a bit through some of the episodes, so I will need to go back and listen again.  If you have never listened to one of Gladwell’s books, or to his podcast, take 45 minutes and listen.  Things I have listened to four or five years ago still stick with me, because he writes and shares about subjects that really make you think. ( And continue to think, years later!!)
*We arrived back in Kellogg around 2 p.m.  I walked around and surveyed the yard, then got to work preparing for my VIPKID Mock Class 1, that would be at 8 p.m.  I gathered items I needed, printed off images, wrote on sticky notes, and practiced going through the class a few times.  Nick, who was my teacher mentor doing the class, was from Ohio.  He was having some computer issues at first.  Then I started having computer issues.  But we finally made it through, and sometime in the next 24-72 hours, VIPKID will tell me what I need to do next.
*Debbie came over around 4 p.m. to talk about the upcoming week, and family dinner and just wanted to touch base about a variety of things. July is a big month for birthdays in our family.  Everett and I share a birthday tomorrow, Jason’s is July 13, and Zoe’s is July 15th.  So we are going to have a big birthday celebration with everyone on Friday night, since everyone should be here to help celebrate!!

Created by Carol Woolum Roberts at 7:14 AM