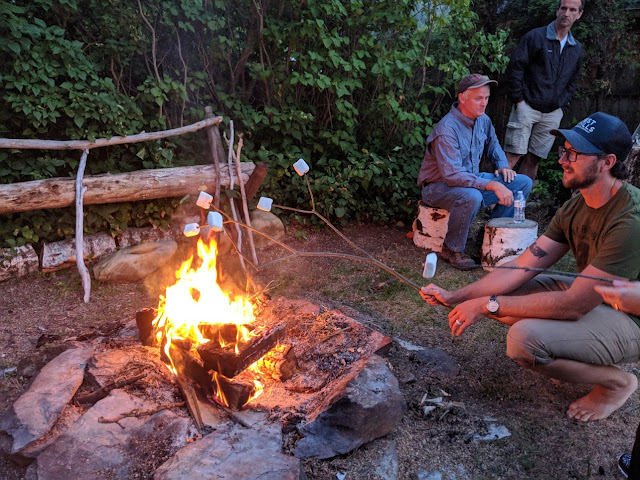 *I decided to get a little extra sleep this morning, so no walking for me this early a.m.  But the extra rest felt good.
*The morning was spent cleaning house and getting ready for a BBQ we had planned for this evening.
*Around 11 a.m., April M Lee arrived, and we enjoyed some time outside.  I gave her a tour of the gardens, and we enjoyed lunch, and catching up.  After lunch we went over to The Bean coffee shop for coffee and more visiting.  Before she moved, that would be a weekly routine for us, so it was fun to do it again today.  After our time at The Bean, April left to do some errands, and I went home.
*Our guests started arriving around 5:30, and it was a wonderful evening.  It was full of people I haven’t seen in a long time, as well as people I had just met.  First arriving was Tina Marshall, who I spent time with in Italy last summer, and her friend Vance.  They came with Kellee Crall Mills, and Kellee’s friend Rex, who is also Tina’s brother. They also brought Kellee’s dog Koach.  Molly and Travis arrived soon after.  Then Andy Broaddus, Jamie Broaddus and Jenna Broaddus arrived.  Andy lives in Oklahoma, and is visiting here for a few days, as well as his daughter Jenna.  Their daughter Jamie lives in Glendive, Montana, and is also visiting.  We missed mom Stephanie, who plans to arrive tomorrow.  Then friends Nikki and Rob Ross arrived, and also April and Eric Lee.  We had a delicious BBQ with marinated elk steak Rex brought, some grilled chicken and some fish.  We also had cabbage salad, potato salad, fruit salad and chips.  Later for those still around, we made s’mores around the campfire.  It was a wonderful evening with some really wonderful people, many of whom I don’t get to see that often.

*I think it is so important to keep connections with people, even if you don’t see them often.  It has been a year since I saw April and Eric, but when they are here, it is important to spend time with them.  It has been a year since I saw Tina, but making that connection again with her, and talking about what has been going on in her life was very special tonight.  The Broaddus family members visit here every so often, and it is always a treat to see them, and make that connection.  And even though Kellee is around Kellogg more often, because of our work schedules we don’t see each other that often, so it was nice to see her a couple times this week.  Even if for a couple hours at a BBQ, making and keeping connections with the people you love is very important to me.
*I have been enjoying listening to Brene Brown, and this is her take on connections. I agree with her on this one, and am so fortunate to have people in my life that I do have connections with, and that I value, and that give me value.
“I define connection as the energy that exists between people when they feel seen, heard, and valued; when they can give and receive without judgment; and when they derive sustenance and strength from the relationship.”
― Brené Brown

Created by Carol Woolum Roberts at 8:07 AM