In the fictional town of New Burbage, legendary theatrical madman Geoffrey Tennant returns to the New Burbage Theatre Festival, the site of his greatest triumph and most humiliating failure, to assume the artistic directorship after the sudden death of his mentor, Oliver Welles. When Geoffrey arrives he finds that Oliver is still there, in spirit anyway, and with his guidance (and often in spite of it) Geoffrey attempts to reconcile with his past while wrestling the festival back from the marketing department. Despite a bitter leading lady, a clueless leading man, and a scheming general manager, he manages to stage a remarkable production of Hamlet -- the play that drove him mad. - Written by The Movie Network - Synopsis

I was introduced to the Canadian television show "Slings and Arrows" when my brother bought me the first season on DVD for my birthday one year.  I remember popping it into my DVD player one day, but it didn't do much for me. 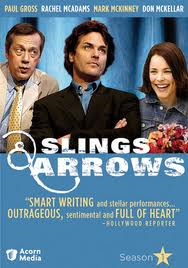 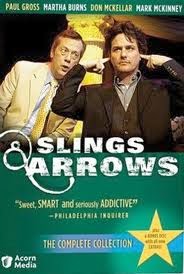 In the first season, the focus is "Hamlet".  Season two focuses on "Macbeth", and the third season looks at "King Lear". 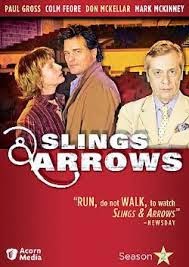 If you want to try a great series, and learn a bit about Shakespeare, try "Slings and Arrows".