While growing up in the Silver Valley, I don't think I realized the impact that Gold Mining had on this region.

So one summer when I was traveling home while living away from the Silver Valley, and I saw the Crystal Gold Mine along the road to Montgomery Gulch and Elizabeth Park, I thought to myself, "What kind of tourist trap is that?"  There was never a gold mine there!!

But, I was mistaken.  During my whole lifetime, there was a gold mine on that road, but it was hidden and nobody new it was there.  And then one day the started digging in the side of that mountain, and uncovered a gold mine that had been shut up.

Here is what the website has to say about the mine:

The Crystal Gold Mine, near Kellogg, Idaho was one of the first hard rock mines in the Silver Valley. Worked during the 1880’s; closed by hiding the mine, it was rediscovered in 1991, reclaimed in 1996, and opened as a tourist historical attraction.
The work was all done in candlelight by hand. The guided underground tour explains how they drilled with "Hand Steels" using "Single Jacks" and "Double Jacks" (Hammers), how they traced the quartz vein using 1880 methods, how they tested the vein for gold. Beautiful stalactite crystals of smithsonite in an array of colors coat the walls. Gold and wire silver can still be seen in the quartz vein.

Here is some history about the mine:

Tom Irwin, a gold prospector, discovered a gold bearing vein in the silver valley in 1879. Tom built a cabin near this mine. His cabin was used as a landmark for many years. Although Tom was the first person to mine a quartz vein in Shoshone County, he did not receive credit for that in the history books (quote):
"Tom Irwin, a gold prospector, discovered a quartz vein and built a cabin at Montgomery Gulch in the spring of 1879. This cannot be verified as the quartz mine cannot be found."
We do not know for sure who mined this mine, but know Tom was in the area.
The mine hillside was blasted down to hide the mine, leaving tracks, mine car and tools inside -- a sure sign that they intended to come back. However, they did not, and the mine stayed hidden and lost for over a hundred years.
In the 1960’s the mine portal was exposed during the building of Interstate 90. In 1991, the owner saw water seeping out of the hillside. Hoping it was a spring; he dug into the portal and discovered more of the mine. The property owner put a piece of plywood over it. 1996, it was sold to a retired miner Bill & Judy Lane, who uncovered the rest of the mine and rejuvenated it as a tourist attraction.
While cleaning out the mine and scaling the ribs, Bill discovered some high- grade gold ore that was left behind. There is no record of how much gold or silver was taken out of the mine.

When we first moved back to Kellogg in 2000, we loved taking visitors on a tour of the Crystal Gold Mine.  It is a great story, and seeing all the old equipment in this old mine was very interesting. Plus you learn a little bit about how they mined for gold back in the late 1800's. 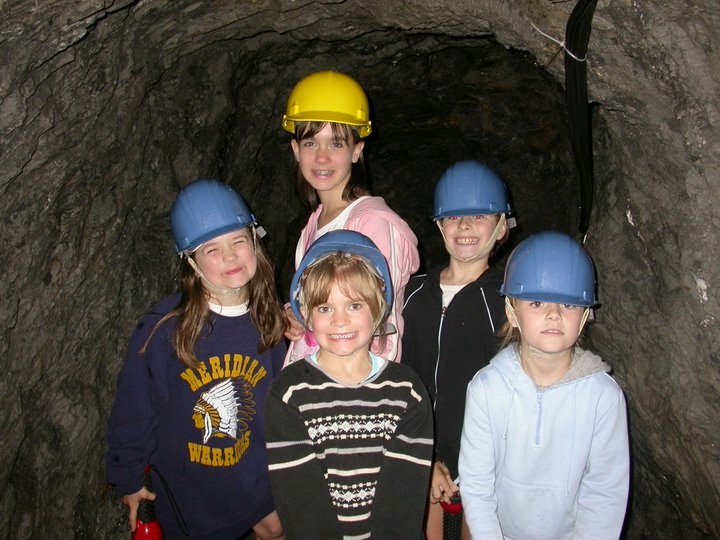 On this trip to the mine, our three daughters and our two nieces posed for a photo inside the gold mine.  We thought this picture was so funny that the girls got together a couple of years ago, and went back to the Crystal Gold Mine and recreated this photograph.

I love the history of the Silver Valley.  And the Crystal Gold Mine is an interesting story that adds to the many tales told in my part of the world.
Created by Carol Woolum Roberts at 9:11 PM