Our recent Sibling Assignment was given to us by Christy.  It was simple.

This was not an easy task, because I have a lot of Montana memories.  I moved to Montana in 1985 to work at my first job as a college graduate.  I was the Director of Admissions and Public Relations at Dawson Community College in Glendive, Montana.

I also lived the first four years of my married life in Montana.

I had my first baby in Montana.

But this past weekend, I attended a football game in Caldwell, Idaho, where the College of Idaho Yotes played the Montana Western Bulldogs, and this reminded me of a very fond memory from Montana involving Paul.

When Paul and I started dating, I was a student at the University of Idaho in Moscow, and he attended what was then called Western Montana College in Dillon, Montana.  I was a member of the University of Idaho marching band, and the band would often travel to different locations.  This fall we made a trip to either Idaho Falls or Pocatello, Idaho to play at a football game.  Since Dillon was relatively close to both of these towns, Paul borrowed a friend's car and came and met me at the football game.  This was on a Saturday night.  We drove to Dillon after the game, and I stayed the night at his friend Marcia's apartment.

I spent the day with him in Dillon, then he drove me back to Moscow.  The drive from Dillon to Moscow was about a 7 hour drive.  On the way to Moscow, we talked and Paul sang to me some songs from his childhood.  One was called "By Rocket to the Moon", and the other was "The Animal Grocery Store".

I think this moment of him singing these childhood songs to me helped me fall in love with him.

Here is what "By Rocket to the Moon" sounds like:


And here are the lyrics to Animal Supermarket. 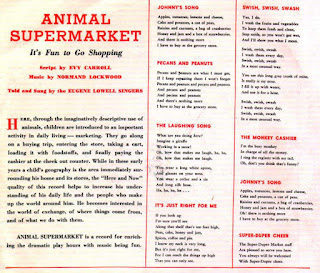 We arrived in Moscow at the Tri-Delt house, and my best friend Carolyn had made a poster welcoming Paul that she put on the balcony of the front of the house.

Paul dropped me off in Moscow, got out and stretched a bit, then got back in the car and drove back to Dillon.  With his window rolled down most of the 7 hour drive to stay awake.  (Ah, the things we do when we are young, crazy and in love).

But things haven't changed much.  We still sing goofy songs to each other.  Now it just happens to be on a stage in front of an audience.

I guess we were meant to be.
Created by Carol Woolum Roberts at 9:44 PM